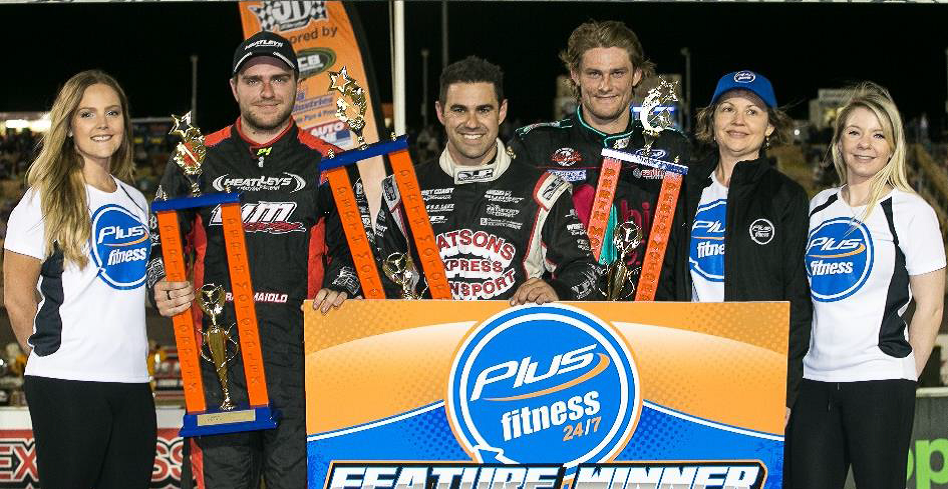 We have said it a number of times already this year, however many are adamant that the racing on Boxing Day has again lifted the bar as the best this season. The racing across all divisions provided maximum entertainment for the large crowd on hand with great duels and plenty of bold moves and slide jobs. In the main event for the Open Sprintcars it was David Priolo who won his first feature of the season, coming home ahead of Bradley Maiolo and Jason Kendrick. While many were enjoying some Christmas cheer the day prior, Gavin Migro and his team were working hard to prepare the racing surface and their efforts were rewarded with a track that assisted in the elbows up racing that ensued. A driver who’s night did not go to plan was Formula 500 competitor Adrian Heywood, his Plus Fitness 24/7 #55 machine landing hard on the tail tank after riding a wheel in the first heat. Our thoughts are with Adrian and the whole Plus Fitness Racing clan and we can’t wait to see you trackside again soon!

Plus Fitness is an Australian owned franchise offering affordable and flexible gym memberships at over 180 convenient locations across Australia and New Zealand. By joining one Plus Fitness you can instantly use all Plus Fitness gyms and with no lock in contracts, 24 hour access, free membership time-hold, great classes, free fitness programs and ongoing support, affordable Personal Training plus innovations like the popular Functional Training Zones, there is nothing else you could want in a gym!

The Perth Motorplex is proud to have partnered with Plus Fitness and excited at the successful fan engagement and promotion generated so far. Plus Fitness has utilized its association with the Perth Motorplex to sign up new members through its event displays as well as drive brand awareness through membership giveaways and brand placement during its naming rights event.

The Plus Fitness Boxing Day Bonanza was promoted through the following Perth Motorplex media providers:

Out of the 11 posts promoting and reporting the event on Facebook, the best performing post was our “Plus Fitness Boxing Day Bonanza Demo Derby” video which was viewed by over 44,000 people.

See link below for the video, produced in house at the Perth Motorplex.

In addition to the fast and furious on track activity, there were a host of other things to see and do at the Boxing Day Bonanza. Fans had the chance to get up close with two of the fire breathing Jet DragStars, Felicity Dragwell and Volcano which were set to hit the drag strip of December 28 while there was plenty of opportunity for the kids to get their energy out on the sideshow rides including “Turbo Tubs”, “Monster Truck Castle” and “Pit Stop Challenge”.